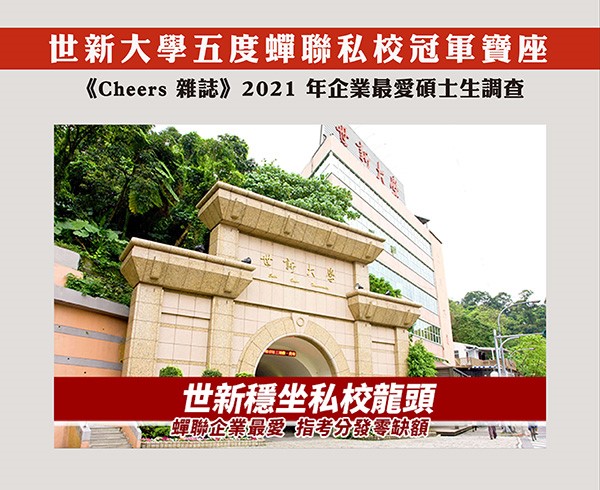 Shih Hsin University has ranked 1st for consecutive 5 years among all private universities for enterprise’s favorite graduate students in the poll done by Cheer’s magazine, stably occupied the leading position among private universities. There are no other student vacancies left after the placement of the last generation of Advanced Subjects Test, Shih Hsin University breaks the record again. According to the analysis, Shih Hsin University has invested teaching resources and equipment and built a building that is connected with the international market. The education policy of integrating theoretical knowledge and practical skills in teaching and preventing graduates as new graduates when they enter the workforce are the reasons that Shih Hsin University is so popular.

Under the dark cloud of a low fertility rate, most universities adopt a conservative policy to reduce their student vacancies. Nonetheless, Shih Hsin University chooses a different policy from others. At this moment, walking to the campus, the strict entry access control makes the campus extra tranquil, however, there is one studio still under construction that catches people’s eye. It is said that this is a teaching center for virtual filming which is built with thousands of LED panels and the use of the latest technology of Hollywood. The virtual studio disrupts the traditional way of video productions, this will be absolutely the first on-campus virtual studio in Asia. According to the university, distinctive education and interdisciplinary integration are the keys to recruiting students. Therefore, the graduates from Shih Hsin University are always the enterprise’s favorite since the large-scale survey on the ranking of graduate institutes done by Cheer’s magazine in 2017. This year Shih Hsin University has defeated national universities and occupies the leading position in the field of public relations and advertising. 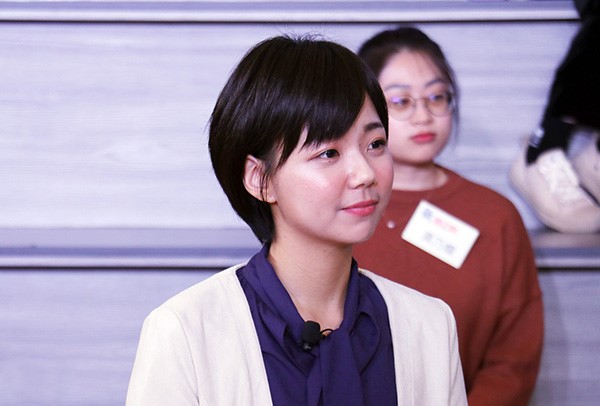 The professional skills and confidence allowed Ms. Ting-Wei Chang, the alumna of the Department of Journalism of Shih Hsin University, to be admitted by five companies when she was looking for new jobs.

Ms. Ting-Wei Chang said frankly that she was afraid of standing on the performance during her first semester of master’s program. After she attended the production of “The view”, the distinctive practical course by analogy with “CNN Town Hall” at Shih Hsin University, as an assigned host by the thesis advisor, this experience improves her personality a lot apart from the theory. “I felt much stress on TV than what I can imagine, but this course makes my life different. No matter attending a job interview or talking to the director, everything will become a piece of cake for you when you can stand on the stage bravely.”, Ms. Ting-Wei Chang said. Changing from introverted to extroverted and being refined propriety in her language, people usually ask Ms. Ting-Wei Chang from which she learned the language. She always answers, “I’ve never taken any training but I can speak confidently because of my learning experience at Shih Hsin University.”

On behalf of Shih Hsin University, president Dr. Joe Y.C. Wu expresses his gratitude for the continued support of enterprises and meanwhile, he praises students from Shih Hsin University for their great performance on their jobs. He emphasizes that teaching and research of Shih Hsin University are linked to the market trend to realize the goal “Graduation means employment”, that the university has continually innovated the teaching environment, for example, the Omni-Media Building was built in 2018, E-learning Center for Virtual Desktop was built in 2019, six research centers were built in 2020, and the first cinema equipped 8K facilities and virtual studio with Hollywood technology in Taiwan will be built in 2021. The above facilities are not only pioneering but also can boost the connection between the local industrial ecosphere and international industries. Shih Hsin University consistently integrates theoretical knowledge and practical skills in teaching for being on a par with the world’s well-known universities.