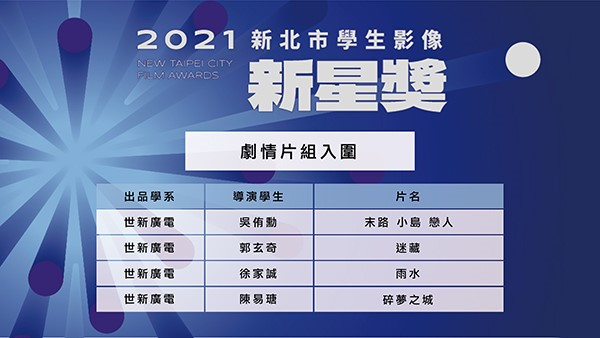 Four film and television products of students from Shih Hsin University are nominated!

New Taipei City Student Film Awards is regarded as a stepping stone to getting Golden Horse Awards and Golden Bell Awards. Students from the related departments of film and television are concerned with this award. The nomination list is announced on the 11th. 45 outstanding products of students nationwide are selected.

The most competitive award this year is in the drama group. 4 of the 16 nominated products are from the students of Shih Hsin University. Obviously, Shih Hsin students have the talent and creativity in film and television products. The assessors also praised Shih Hsin students for their creativity based on the familiar filming techniques, that open the new perspective of student’s creation.

Due to the pandemic, the New Taipei City Student Film Awards of this year invited a group of assessors comprising many VIPs of senior authors and scholars to the online award ceremony on the 17th of October. Let’s send our best wishes to Shih Hsin students. Good luck to students from Shih Hsin University in the competition!